I Am Not in Control

One of the first lessons God taught me in becoming a parent was that I am not in control. Parenting has this unique way of making you holier—of refining you. Life will do that, but parenting really seems to put the pressure on.

My husband and I got married and quickly realized we didn’t want to delay having children the way we thought we would. We still had the notion we could control our lives, but we decided to up the timetable on the “then comes baby” part of the equation. As the months went by and no baby came, we started to get a little thrown. We wanted a baby. That was part of our plan for our family. At the one-year mark, the testing starting. First, the not so invasive tests, followed by the invasive and painful tests. At the two-year mark, we sat side-by-side across from the doctor discussing “next steps”. As the doctor talked about what could be done, what couldn’t be done, and what options we should start exploring and discussing, Psalm 20:7 kept popping into my head. “Some trust in chariots and some trust in horses, but we trust in the name of the Lord our God” (ESV). As the grim prospects were laid before us, I felt the unasked question being asked: “In whom do you place your trust?” I realized in that moment that I had been living under the idea that I was in control. Clearly, that was not the case. On the drive home, in the quiet car, I remember being a little timid about what God was clearly asking me, clearly showing me. I remember saying, “Did you hear the question—not the one the doctor asked, but the underlying one? ‘In whom do you place your trust?’” I remember being relieved that I wasn’t the only one hearing that, sensing that. And we knew what our answer would be.

It was a hard answer. The answer was that we were giving up our dreams and placing our trust in Jesus. After two years of praying for our will to be done, we were saying, “We get it. We’re not in control. We’ll take what You have.” I called the doctor the next day and informed her of our decision not to pursue further treatment. She said, “You’ll never have a baby!” I said, “Maybe so. But we’ve made our choice.” And with that, we closed our pursuit of our plan and gave it to Jesus.

Nothing in me was able to will another person into existence. I did not have the power to create life. Life is in Jesus. All things are created through Him, not me. I am not in control. Even with my grip firmly around what I think is mine, I’m never really controlling it. Praise the Lord for showing me that.

If you’ve read my bio, you know where this thing goes. We sold the house we bought that was “perfect for raising children”. We moved across states for my husband to go to seminary. We moved into a tiny apartment, and we waited for God to show us His plan.

Two months after telling the doctor of our choice to trust God, I was pregnant. Two months after giving up our plan and taking His, He gave us a child. After two years of holding on so tightly to what I wanted, never seeming to will it into existence, I laid that on the altar, and God gave me back something even better.

Every parent is going to have to come to terms with this at some point or another. There is nothing you can do to keep your children completely safe. You cannot will them into existence. You cannot will away a fever at 2 a.m. You cannot will away every bad thing that will ever be around them. (And even if you could, it wouldn’t be healthy for them.) You aren’t in control. God is. He made them. He sustains them. He “sees their going out and their coming in” (Psalm 121). You can white-knuckle your way through all you want; it won’t change a thing. He is God; you are not. At some point you will have to answer the question: “In whom do you place your trust?” 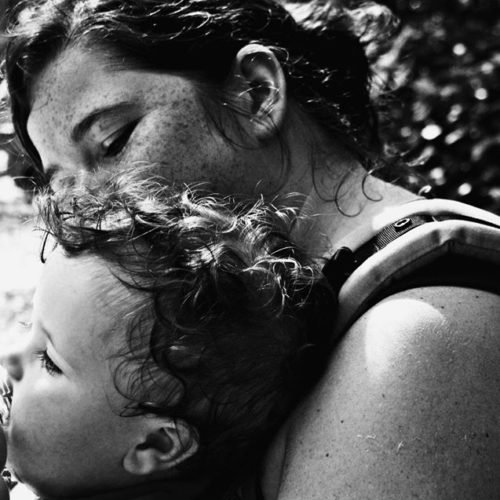